Workers' Compensation Insurance in North Dakota
Save money by comparing insurance quotes from multiple carriers.
What kind of work do you do?
Or call us at (800) 668-7020

Workers' compensation insurance covers the cost of work-related injuries. It's required for all North Dakota businesses that have employees, including part-time workers.

Business owners of various types are not considered employees and therefore aren’t required to have workers' comp coverage for themselves, including:

However, the above owners may opt to purchase workers' comp. It's a smart financial decision, as your health insurance provider might deny an injury claim if it's related to your work.

If North Dakota Workforce Safety & Insurance (WSI) determines that a person is exempt from workers’ comp due to being an independent contractor, the decision is effective for one year.

How much does workers' compensation coverage cost in North Dakota? 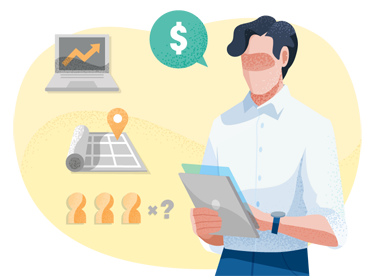 Estimated employer rates for workers’ compensation in North Dakota are $1.14 per $100 in covered payroll.

Your workers' comp cost is calculated based on a few factors, including:

How does workers’ comp work in North Dakota?

When an employee is injured on the job, workers' compensation insurance coverage pays for emergency treatment, prescriptions, physical rehabilitation, and other medical bills. It also covers part of the wages lost during recovery.

Workers' compensation benefits for injured workers in North Dakota include:

For example, if an IT tech or software developer is diagnosed with carpal tunnel syndrome due to keyboard overuse, your workers' comp policy would pay for their medical expenses, including long-term medication and physical therapy.

Or, if an employee at your IT consulting firm trips in the office stairwell and suffers a concussion, then your workers' comp policy would pay for their ambulance ride and emergency room visit.

How to buy workers' compensation coverage in North Dakota

North Dakota is a monopolistic state when it comes to insuring employees against job-related injuries and illnesses. This means you can’t buy workers' comp coverage from a private insurance company. Instead, you must buy it from a state-run workers’ comp plan.

All North Dakota workers' comp policies must be purchased from the state fund, provided and administered by North Dakota Workforce Safety and Insurance. Even employers who are considered high risk are guaranteed coverage.

Workers' compensation insurance usually includes employer's liability insurance, but that's not the case when it's purchased through a state fund.

North Dakota employers who want this coverage, which protects against employee lawsuits over injuries, must purchase it as stop-gap coverage. They can usually add it to their general liability policy purchased through a private insurer.

What are the penalties for not having workers’ comp in North Dakota?

Violating North Dakota’s workers’ compensation statute is a serious concern. Here are the penalties you may face if you don’t comply with state law:

Given these penalties, all North Dakota employers should strive to remain in compliance with the state’s workers’ comp law at all times.

In North Dakota, many workers’ comp claims end in settlements. This means the parties to the claim must agree on a lump-sum payment in return for the employee agreeing to forgo future payments.

Because North Dakota maintains a monopolistic workers’ comp fund, the state, not a private insurer, must approve all settlements. The state is open to alternative arrangements such as closing out an employee’s disability claim while holding open future medical benefits. Another alternative: converting future benefits into a structured settlement, which involves an annuity-like arrangement in which employees receive payments over a number of years.

In North Dakota, employees must file a workers’ comp claim within two years from the injury date. This is the first date any reasonable person would have recognized that a work-related injury happened.

Get free quotes and compare policies with TechInsurance

If you are ready to explore workers’ compensation coverage options for your North Dakota business, TechInsurance can help small business owners compare business insurance policy quotes with one easy online application. Start an application today to find the right insurance coverage at the most affordable price for your business.